As I sit here at the front desk of my library I finally have to say, enough is enough!

I can no longer reasonably justify making fanciful pictures on my phone all day. My blog, my two blogs! (visit Life is a Fountain blah blah blah), are overwhelmed with peanuts characters getting library cards, Daffy Duck throwing fits in the back room, and figures from Norman Rockwell Paintings conducting business at, well, at the very desk I am sitting at right now.

My grip on reality is fracturing!

I don’t really work in a world peopled by Addam’s Family characters, Maxwell Smart, and figures from Winnie the Pooh. Dragons Love Tacos dragons do not apply for library cards! And my making it so on my phone, hour after hour, cannot be healthy. Also, whatever happened to my quiet ruminations on the state of library work, or reviews of forgotten novels, or amusing accounts about supply procurement for the county? I vow to return immediately and without fail to these quiet studies,  these calm, elegant illuminations, and these gently humorous anecdotes that have brought you here to my website for all these years. Indeed, these are the bread and butter essays that have built me a

THERE’S A DINOSAUR IN THE LIBRARY!

I’ll try to snap a quick picture, but then, if you value your life 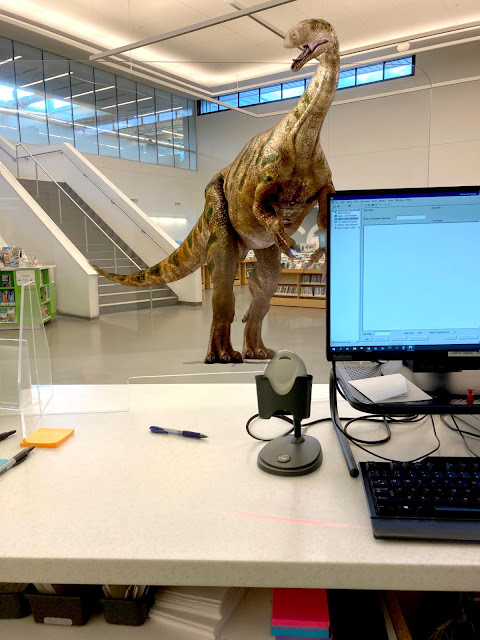 From the moment I got a phone, a real phone, my effectiveness as a library employee has been on a roller coaster ride. There was a small dip at the start as I discussed phones incessantly with all my co-workers and texted them from six feet away. Then I, metaphorically, climbed quickly as I found podcasts and audiobooks and became one of the most quietly dedicated shelvers and materials processors the library has ever known. But, of course, what goes up must come down, and I have never known a quality shelver who stayed a quality shelver. Somehow we all get distracted. For the industrious types it’s usually by some niche library project they can obsess and stew over to their hearts content. For me the downfall was finding out that I could insert Peanuts characters into random pictures I took of my library.

What a thrilling, heedless fall it was! I plunged, hands in the air and a look of terrified ecstasy on my face. But that too had to level out finally. All those co-workers saying “You sure do like that phone, don’t you?” And all those library patrons saying “Ahem.”

“Do you want to see a picture of Charlie Brown’s little sister Sally, in the library?”

I’m not through the roller coaster of phone use yet. I’m still whizzing along, though it’s more level in its twisty way now. I’ve combined the two divergent elements. The other night I shelved every single one of our requests, three carts worth. It’s amazing how much one can get done quickly when one desperately applies oneself. Fortunately I had a reward; with no requests left to shelve there really wasn’t anything left for me to do except edit pictures.

Want to see a picture of Charlie Brown’s little sister Sally, in the library? 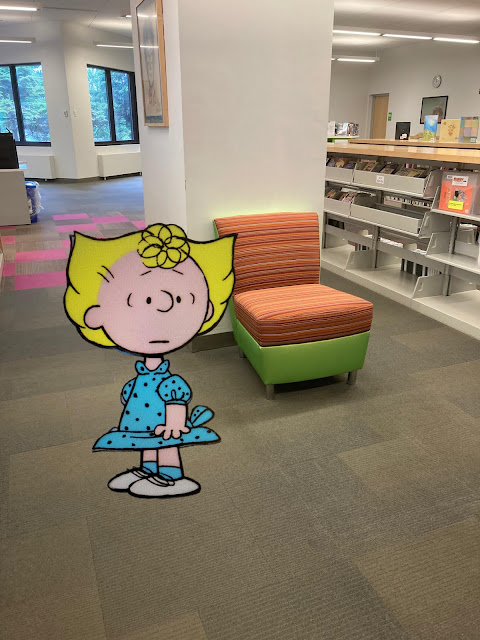 Do you want to see one where she’s delighted about having asked the Children’s Librarian a question? 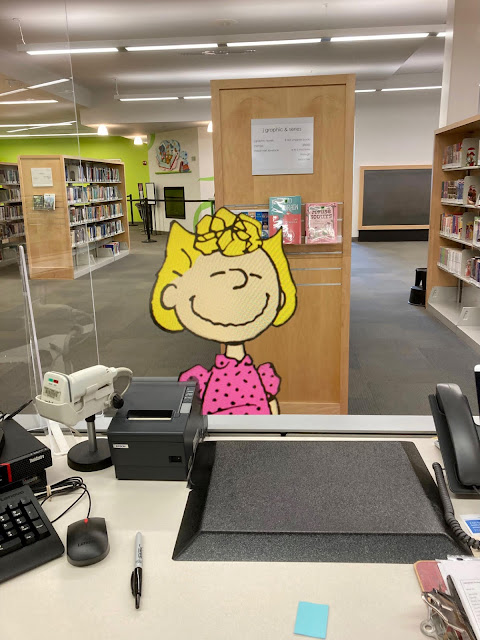