Yes, this is the

Oh, is the dramatic music over?

So you have stumbled upon (or arrived in a moment of perfect destiny) the spirituality page.

I write about spirituality tons!

Well, eventually this will be true.

And that, in its way, is spirituality. 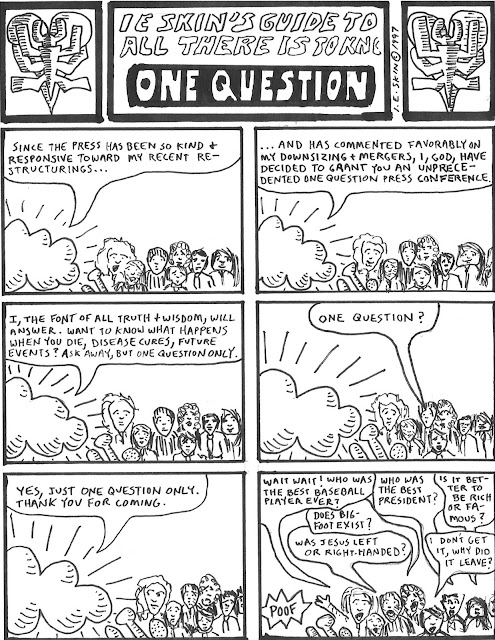 I Will Provide the Answers

You know that when you are done with all of this, when you come to just past the end of life, God is not going to ask you:

“Did you write anything good?”

“How good was your art?”

No, God will say:

“What was that?” You’ll reply.

“I should drink more water? I should’ve been kinder to cats? I don’t know what you’re saying!”

And God will reply:

And God will say:

Which is why it is absolutely essential that

(Dual posted on the Art Page)

But they have a purpose.

They are saying that artists are just like God!

I know that sounds grand, but what it really means is that it can be wonderful to be an artist, sure, but it is full of rules.

Well, there is actually just one rule.

It is the same one rule God has.

You can inspire, suggest, and raise empathy. You can dazzle, cast spells, amaze, and allude to the right thing. But hands off.

I know what you are thinking:

Maybe then there is just no god.

And so perhaps they cast god in their own image.

“Hey, spirituality is kind of a general, non committing catchall. What really is your religion?”

Once a month or so the Atheists book our large meeting room at my library. It is always on a Sunday, giving the feeling that they’re setting up in a direct competition. They were here just this past Sunday while I was at the front desk. The vestibule that leads into the meeting room is white and lit up. It even glows a little. My desk partner kept directing people who were looking for the Atheist meeting by saying “Go towards the light.”


“In deference to their beliefs you might want to offer more scientific directions.” I suggested. “Like, head 30 degrees South by Southwest and take the first branching left.”


Later in the back room one of my colleagues surprised me by confessing that the Atheists kind of creeped him out.


I suppose I was being a tad willful, and theatrical. A nearby volunteer was keeping a conspicuous poker face. My colleague was too eager to go outside and smoke his cigarette to pursue the matter, and my own words forced a reckoning in me. I looked around my library. I looked at what I knew of the world. Most people are entirely that bad at their job!


Still, I refuse to think any of them are God.

I killed a rabbit.

I was driving home in my murdermobile when I came onto Highway 280. Note that it was a highway. I was traveling at about 50 mph when a rabbit leaped in front of my car. I don’t know why. He was just beginning a relatively long journey across four lanes of roaring traffic when I hit him. One can surmise he wanted badly to die. But I might be looking for a way out from under all the… blood on my hands.

Now I am become Death, the destroyer of worlds.

Did I have time to put on brakes? I guess I could have slammed them, and if I did it quickly enough then the braking would have commenced meaninglessly just after my smearing of the small animal beneath my car. Could I have swerved? Only if I wanted to hit him better. The actual thought I had in the half second after the rabbit appeared in front of my car and the point of my bringing quick and ragged death to him was “Just don’t panic, make sure the wheels don’t hit him, and if he lies low…” I think I was on the lie low part when I felt the undercarriage of the car grab him by the ears, or back, or head, hideously hurl him to the ground, and bounce him bloodily between the car and the highway before leaving his pulped and ruined corpse behind me.

Grape, in my small but clear headed audience, raises his hand.

Oh, of course I remember Grape. That was always part of this story. You see, I was an accessory to a rabbit murder once before, many decades ago. Grape and I were driving home from a backpacking trip. Grape was driving. The sun was setting in the long California desert. A jackrabbit rushed the road. Grape did what he could, but, “kerpluckt”, the wheel smushed the poor wee hopper. A stunned silence fell on we tired nature lovers. Grape was devastated. I felt probably exactly the same way as I do now at my own inadvertent rabbit murder, 30 years and the lifetimes of billions of rabbits later. We did not say much for awhile. That he could not avoid this accident was but little succor when we mused on it. We stopped for gas.

We went into the gas station. A devastated Grape said to the station clerk “I feel terrible. I just ran over a rabbit.”

“Aw, man.” The clerk replied “There’s so many rabbits around here we go out shooting them for fun.”

Well, I’ll have you know there are quite a few rabbits around here in the spring too. Not that I was running that one over for fun.

I’ve eaten rabbit a couple times. Both of them were at very fancy restaurants. At no point was I wracked with guilt. It didn’t occur to me to feel guilt. Though, considering it now, why not. Go ahead and feel a little guilt, all the storied chefs and rabbit ranchers and rabbit butchers in the world cannot strain out the fact that those rabbits deaths go on my account. Yes, somewhere there is a great heavenly (or hellish) list of all the animals we killed or caused to die.  Oh what a list. And to make one feel worse about it when one looks at the list the list doesn’t say, like, “Mosquitoes: 18,265” No indeed. Each one is personally listed, with a name, like “Lucretia, Mosquito, 2 days old. She just had kids. She was happy.”

How do they know she was happy? They know everything.

Speaking of driving deaths. Once I was driving home with my friend Matthew, across the Dakotas. We were beset by plagues on our way home. First were locusts. We had to use windshield wipers. They coated the front of the car. But that was nothing. The rains came, and then the frogs. Ah god, the frogs. For some reason they poured out onto the highway in countless thousands. “Thumpity, thumpitithumpitithump tump tump tum, pup pup pup.” To drive was to kill them in the hundreds, maybe more. We pulled over. Look at all the frogs! Look at all the dead frogs we ran over. Should we just sit here forever by the side of the road? No. We drove on. If we drove slow we killed them slower for a long time. If we drove fast we killed them all at once, for miles and miles of murder. Hundreds of frogs. Thousands of frogs. All with names and written with blood on our souls.

So what is a mere rabbit to all those frogs?