I went on my Thursday walk, through a neighborhood of homes more expensive than I imagined they were before the real estate agent told me about it after I photographed a white squirrel on the land he was selling, to a creek even quieter than I hoped. And along this way I came to the River. I walked along its bluffs on a narrow trail. I tripped there once this Spring and I had just remembered that, so I was suddenly being careful, when I spooked a large bird.

It’s funny how you can have a sense for what kind of bird it might be without really even seeing it. There’s the sound and beat of its wings as it lifts into the air, everything from the buzz of the superlight and fast humming bird, to the heaviness of the thrum of a large predator. This was the latter. Leaves were displaced. A half second of hole was formed in the tangled greenery of the woodland. I saw the hole he left more than I ever saw the bird. And though he was not loud, rather he was deep like an acoustic bass, I marked his cessation of his sound.

Though I could not see him, and had not seen him, I hoped to see him.

Unfortunately, being on something of a cliff, I had limited options.

I was on a creek, well, more like a rivulet, and it allowed me to drop to a level below me. From there I had a bit of manageable land that jutted out to where everything dropped off very steeply to the Mississippi below. I edged out to the end of it, trying to slice brave and cautious right down their center. And standing exactly on that line I saw him. Through all the great Summer greenery, the winding branches, and the shadows, in a little pocket of space, the head of the bird.

I levered around for the best view, but there was none, no best view, just my one fractured tunnel of sight through the leaves.

My camera, who has its own mind, wanted everything darker when I tried to take my picture, and it wanted to focus on all the hundreds of interesting things that came before the bird, instead of the bird.

But eventually I got it, as well as I could.

And then the bird flew away without any sound at all. 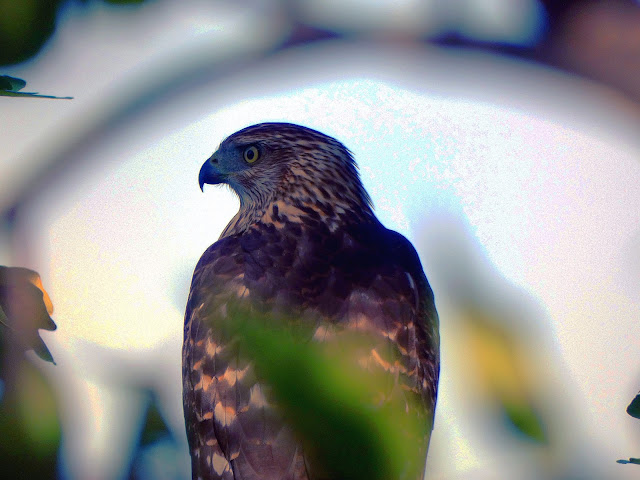